Induction Charging Seems All the Rage … But Is It Really on Its Way Out? 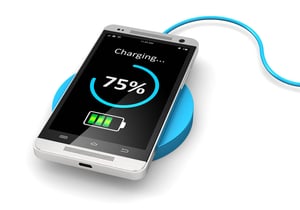 Induction charging, predominantly Qi[1], or contact charging, is everywhere. The technology has essentially been around for more than 100 years, and low power modern applications as we know it -- such as cordless toothbrushes (since 1970) and Qi-enabled smartphones (for about a decade). Manufacturers, distributors, and consumers alike have had lots of time to adopt the technology.

But will it last?

What’s more, you can’t hold the device or carry it around while it’s receiving a charge. If Wi-Fi acted like that, we would not call it wireless. (imagine getting internet access only when your device is sitting on top of the Wi-Fi hub).

True wireless charging would not require wires at all, right?

In any case, in the last few years, building a receiving induction coil into a low power device has become the norm, and finding a compatible Qi charging accessory is simpler than ever.

Recently, we learn that Apple may be planning to embed induction charging coils into future MacBooks.[2] Their patent application drawings show that the smartphone or smartwatch would need to sit on either side of the trackpad, where your hands would rest while typing, to receive a charge.

And Panasonic Automotive recently revealed an enhanced Qi-based charging pad for vehicles at CES 2021.[3] In just two years, by 2023, the world-wide induction-based wireless charging market is predicted to reach more than $13,500 billion U.S.*[4]

Induction based “wireless” charging is no longer an innovation, it’s an expectation for smartphones, and recently to large devices like vacuum cleaners and robotics**.

Induction charging had a long, steep climb to get where it is today, which is to say, it is now a commodity, and not of great value at that: the reason newer pad chargers can deliver more and more power is that this is its only trick. And that starts pointing at its limitations.

Faster charging for smartphones is definitely a huge need, since you want to have your device back sooner. But what if there was a way to keep your device on you and never let go and have it charged throughout the day?

That’s not a what-if today. Real wireless power that can power and charge devices at a distance is coming. But that is not its only trick. It can power all our small battery powered devices at a distance; we are talking home security sensors, smoke detectors, wearables that you don’t have to take off to charge and factory automation to name a few.

Why name a few, if we can name them all: Internet of Things or IoT.

Humanity is leveraging smart devices to the tune of 100’s of devices per cell phone out there, reaching a dizzying 1 trillion devices in the next ten years.

Induction charging gave us an extension cord that has reached its limit, now is the time for revolution in powering our devices, where we can power all our devices from a distance similar to Wi-Fi (30 feet or 10 meters) for IoT and wearables.

That is Real Wireless Power technology, and it’s the innovation that will eventually replace or enhance Qi-enabled devices for many applications. It’s wireless power over air, at a distance, while we’re using it. And it exists today, in Ossia’s Cota technology.

Already FCC certified for certain commercial applications, with global standards in development, and being rolled out in several real-world scenarios, Cota Real Wireless Power is at the top of its uphill climb, and those businesses that embrace it now will enjoy the early benefits of the next generation of truly wire-free power.

Does Real Wireless Power Belong in ...