Our very own Hatem Zeine authored and published a piece on Forbes recently. We have reprinted it here for your reading pleasure. 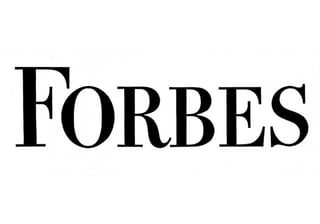 Digital technology seems to have lowered costs in every U.S. industry besides healthcare. Americans spent $3.35 trillion on healthcare ($10,345 per person) in 2016. Washington D.C. fights over who should pay for care, not how to improve it. I believe the internet of things (IoT) -- a system of internet-connected sensors, devices and applications -- has the potential to solve our crisis.

Physicians can spend more than 15 years on their education and want a return on their investment. But they can only treat one patient at a time and often need a team of nurses, specialists and technicians to do so. One patient pays for the time of multiple highly educated professionals even just to get a diagnosis.

There is no mass approach to care. However, an internet of health (IoH) built from networks of IoT devices could create a nation-wide approach to the prevention and early detection of diseases.

The Case For Better Detection

In the U.S., the two leading causes of death are heart disease, which claimed 633,842 lives in 2015, and cancer, which took 595,930 people. These treatable diseases are more likely to be terminal when they are diagnosed late.

Early detection of cancer is priceless, but our one-to-one model is reactive. Maybe the doctor catches something at a yearly physical, but until the symptoms can’t be ignored, detecting cancer is mostly luck.

I think IoH can do better than luck.

Diagnostics For The Masses

Why couldn’t IoH mugs and cups run these salivary tests at home? What really keeps medical diagnostics in the hospitals and out of our homes? In the 20th century, we condensed mainframe computers into laptops. This century, I believe we’ll shrink bulky medical devices into dishware, handheld sensors and many other devices.

Saliva is just one avenue to detect or prevent treatable health issues. We could go further. Picture networks of air quality sensors that warn people of spikes in particulate matter. Given that lower respiratory diseases are the third leading cause of death in the U.S., that information could save lives. Imagine sensors in grocery stores and restaurants that monitor for E. coli, norovirus and other foodborne illnesses. Consider that if only Flint, Michigan, had IoH sensors in its water supply systems, 100,000 residents could have potentially avoided exposure to lead poisoning.

A global network for detecting and preventing disease will face obstacles. A few of those deserve attention:

We’re not going to run cables to 204 million devices when installing a single wire can cost $500. No one will want to charge their collection of diagnostic dishware every night either. And I can assure you that no one will change out batteries in that many devices, especially if they’re administered by governments.

IoH is only feasible with wireless power distributed like Wi-Fi.

2. Privacy: Initially, people will be reluctant to feed personal behavior and biometrics into cloud platforms owned by private or public health organizations. It is a leap of trust and privacy.

Thankfully, we’ve been through this before. We harbored similar concerns about online payments in the early 2000s. But today, at least 79% of Americans shop online, according to Pew Research Center. We get acclimated to useful innovation, whatever the risks may be.

The chance to diagnose cancer or heart disease early should outweigh fears about privacy. However, the devices need ways to recognize who is using the device. And they need sensitive ways to share their findings. A coffee mug that announces, “You have lung cancer” to a mother in front of her family wouldn’t go over well.

3. The Medical Community: Diagnosing illness is big business. It’s conceivable that healthcare companies and lobbying groups will oppose IoH, spinning it as inaccurate, misleading or reckless. Businesses don’t like being disrupted.

Instead, I hope healthcare groups partner with diagnostic devices or produce them. When a disease is detected, the owner will need treatment. The system could provide referrals to nearby doctors in the appropriate specialty. Maybe it would even remind the owner to take pills or perform rehabilitation exercises after surgery.

Today, when I see the statistics on heart disease and cancer in America, I know we can do better. Our one-on-one model detects diseases too late and too expensively. IoH would detect disease earlier and at a small fraction of the cost. We could treat diseases before they become irreversible and financially unsustainable.

The advancements in salivary diagnostics, internet-connected devices and wireless power give me hope that an internet of health is around the corner. I want it for my loved ones, and I want it for you and yours, too.