Here's What Over-the-Air Charging From Spigen, Ossia Smartphone Cases Could Look Like

Spigen, smartphone case maker, and Ossia, a wireless charging technology vendor, are revealing more about the Forever Sleeve, a smartphone case in development that’ll be able to charge phones without wires, plugs or pads through over-the-air charging.

The smartphone case is expected to debut in 2020. We got a hands-on with a prototype of the Forever Sleeve during CES this January. The case works through Ossia’s Cota technology, which uses a chip that sends a signal to a transmitter developed by Ossia. That signal can bounce off of other objects, so you can charge your phone while it’s in your pocket, on a desk or moving around the room up to 10 meters away. The transmitter then sends power back to the device that's emitting the signal. 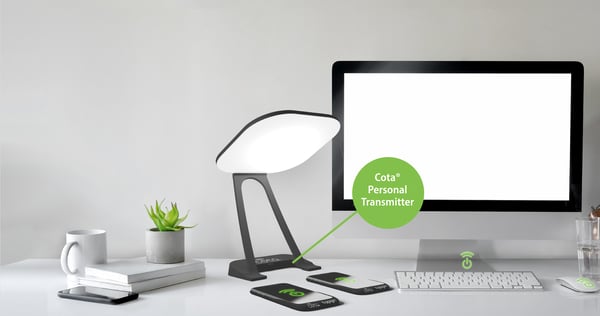 It seems Spigen and Cota are getting closer to making the combination of two smartphone necessities—charging and damage protection—a reality. During Mobile World Congress in Barcelona today, Ossia unveiled a prototype of a transmitter (pictured above) for Spigen cases. The transmitter looks like a desk lamp and is being demonstrated as a power source for a mouse and keyboard too. In fact, during CES, Ossia told us one of its transmitters, which can take different form factors, can charge up to 1,000 devices at a time.

“The photos represent the present version of the 5.8 GHz system. Ossia is on a continuous development path, so these transmitters may change in form later on,” an Ossia spokesperson told Tom’s Hardware, explaining Spigen will be working with designers to create a transmitter for personal use. They noted that it’s possible the design could be adapted for a mounted transmitter, as opposed to the desk version being showcased.

Spigen will prioritize making over-the-air charging cases for the most current Samsung Galaxy and Apple iPhones when it launches. Ossia showed us a prototype design in January, but at the time, told us the real case should be much more attractive. 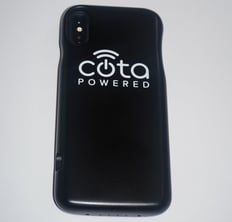 Today, Spigen told us that incorporating Cota tech into its cases won’t affect their design too much, except for having slightly larger dimensions than their traditional cases.

That transmitter may also be able to charge more than one Cota-enabled Spigen case, which may not slow down the charging process, Ossia told us. “The transmitter is smart and can be prioritized to send power to devices that need it more, or a user designated priority,” the Ossia spokesperson said.

Ossia also noted that its transmitters should enter retail spaces this year, and it expects Cota transmitters to be embedded into vehicles by 2021. There are several more partnerships under development that have not yet been made public, the company hinted.