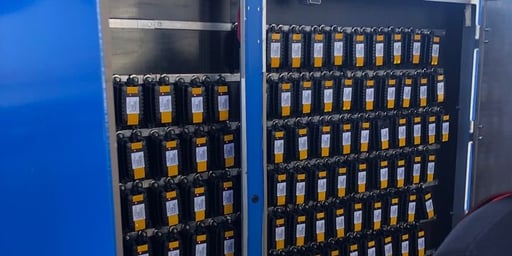 Finding lost trailers among hundreds of nearly identical trailers takes significant time and effort, and poses a safety risk with a high level of manual human intervention to search for these trailers in the yard, Ossia officials explained in a press release.

Due to the fact that trailer tracking devices are temporary trackers and not permanently connected to power, they have to be recharged between uses. Distribution center access gates lack the onsite infrastructure to charge thousands of trackers in between uses, officials said.

The system uses Ossia’s Cota wireless over-the-air charging technology which charges a GPS-enabled asset tracker. The tracker’s magnetic legs hold it in place for easy deployment on incoming trailers, and trackers from outgoing trailers are placed back in the charging station for recharging.

Depending on the variant of GPS tracker selected, the battery can last for several weeks while stationary in the yard. Each tracker is equipped with an accelerometer to ‘wake’ the unit on motion. For trailers that are continually moving, the trackers can be set to ping up to every 30 minutes for real-time accuracy.

The Cota-enabled asset trackers and charging stations eliminate risks associated with traditional trailer tracking methods, which require associates spending many hours on foot in the yard looking around for lost trailers. In addition, wireless charging of hundreds of devices simultaneously eliminates the need and inherent risk of extension cords, cables, and charging stations scattered throughout facilities.