GeekWire is putting its own HQ2 in Pittsburgh for the month of February 2018 — reporting on the people, technologies and ideas transforming the industrial city into an innovation powerhouse. 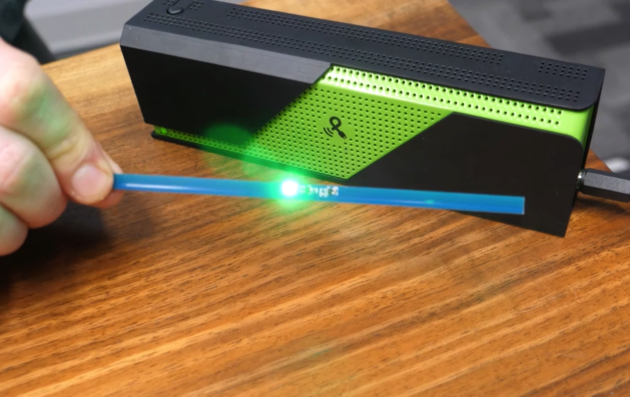 PITTSBURGH — The idea of ubiquitous over-the-air wireless charging is a dream for people living in a tangled web of charging cords and adapters. Walk within range of the wireless transmitter, and an invisible beam of power charges everything from the smartphone in your pocket to the smartwatch on your wrist.

We’re not there yet, at least not on that scale. But several companies are inching forward with products and technologies that will provide a glimpse of this potential starting this year.

One of them, Powercast, based just outside of Pittsburgh, plans to release an over-the-air wireless charging hub called PowerSpot in the third quarter this year, focusing on powering smaller devices like game controllers, earbuds and fitness bands overnight within a range of a few feet. A recent demonstration at the company’s offices provided a clear sense for the current capabilities and limitations of the technology.

“All that stuff that goes around your phone — earbuds, headphones, smartwatches, fitness bands – that’s a different charger for each one of those things. It’s starting to become a headache,” said Eric Biel, principal engineer for Powercast, during our visit to the company’s headquarters. “Given the current regulatory environment, we can charge those devices overnight.”

Powercast, an early pioneer in the over-the-air wireless charging market for commercial applications, received its Part 15 FCC approval for the PowerSpot consumer wireless charging hub last year. That approval limits the output to 1 watt of power. From a practical standpoint, that rules out scenarios like charging a phone, for now.

“We can do the phone, but it takes a very long time to charge,” Biel explained.

PowerSpot is expected to retail for about $50 when it’s released later this year.

The over-the-air wireless charging technology works by sending RF energy to a receiver in the device, which converts that RF signal to DC power, which is then used to charge the device or its batteries. The company is working to get its receivers embedded in devices, and in the meantime, it’s demonstrating the technology in retrofitted devices including game controllers and headphones.

It’s one of several companies competing for a foothold in the over-the-air wireless consumer charging market.

Energous Corp., a publicly traded company based in San Jose, Calif., received its FCC Part 18 approval last year, enabling larger power outputs over the air. This was viewed by investors as a major milestone for the company and the broader market. Energous executives said on a conference call this week that their WattUp 2.0 over-the-air charging technology is on track to hit the market in stages late this year and early next.

Steve Rizzone, Energous CEO, described 2017 as a “defining year” for the industry and the company.

But in a sign of how nascent the market is, Energous reported just $1.2 million in revenues in 2017, down from $1.5 million the year before, along with a loss of more than $49 million. The company’s revenues so far come primarily from engineering services, not product sales.

Another competitor in this market is Ossia, based in Bellevue, Wash., which is planning to license its Cota over-the-air wireless technology for a variety of uses, including retail settings, where digital signs could receive continuous wireless power, for example. At the Consumer Electronics Show in Las Vegas last month, Ossia showed technologies including a AA wirelessly rechargeable battery, and the next version of its Cota Tile, a wireless power transmitter that is designed to look like a drop-ceiling tile.

While many consumers are focused on over-the-air smartphone charging, the bigger potential is in the broader Internet of Things market, said Jennifer Grenz, Ossia’s vice president of marketing.

“There’s no way you can get to a trillion IoT devices without wireless power,” she said, citing analyst projections for the IoT market. “Wireless power is going to go hand-in-hand with the evolution of this entire market.”