Wish Your Batteries Would Last Forever?  Now They Can

It was named a CES 2018 Innovation Award Honoree in the Smart Home product category, which includes products that offer “sophisticated monitoring and control [and/or] provide for remote or conditional access.” 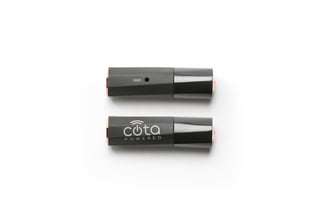 The Cota Forever Battery charges without you having to think about it, and doesn’t interfere with other wireless technologies in the room. The power is received over air via Ossia’s Cota system and can safely power multiple Forever Batteries, even while in motion. You can read here about how our Founder and CTO, Hatem Zeine, talks about the technology changing nature of batteries and wireless power.

What’s more, it enables “dumb” devices to become smart. When a device is Cota-powered, you’re able to monitor and partially control that device from the Cota Cloud web platform or mobile app. For example, you’ll be able to manage power usage and even connect battery-operated devices so that they communicate with each other.

This is another step Ossia is taking to show the world of IoT what is possible with Real Wireless Power.  As our CEO Mario Obeidat says, “Cota is a perfect example of a fundamental innovation. Not only does it make the lives of a few billion smartphone users more convenient, is also makes the future deployment of a trillion IoT devices possible. Without Real Wireless Power, IoT can never reach its full potential.”  Hatem also posted about wireless power in Smart Homes earlier this year. You can read it here.

Retrofitting your devices with the Cota Forever Battery is your first step to cutting the cord and eliminating the need for batteries.

The CES Innovation Awards recognized Ossia’s achievement in product design because the Cota Forever Battery is different from other wireless power solutions.

This is the third year in a row that Ossia’s wireless power innovations have been recognized by CES -- a rare achievement for any company at CES! The others that we earned are:

The Cota Forever Battery builds on both of these wireless power inventions.

How Is the Forever Battery Different than Qi?

Qi wireless power requires the chargeable device to come into contact or close proximity with a charging pad or mat. This is called contact-based (or induction) charging, and it’s built on concepts that date back to Nicolai Tesla’s work in 1891.

Ossia’s technology does not require contact or closeness with a pad to charge. The Cota system charges devices at a distance much like WiFi delivers data; it just needs to be in the same room.

Why Switch from the Traditional AA Battery?

Double A batteries are a common household and workplace staple; they fulfill energy requirements for security systems, locks, thermostats, remote controls, leak detectors, and other Internet of Things (IoT) devices when you need them.

That is, until they don’t.

Disposable AA batteries never last as long as you hope or need, and if you’re like us, you have a box full of used batteries ready to recycle so you don’t contribute to the more than 3 billion batteries are thrown away in the United States each year.

That’s a lot of toxic materials -- alkaline, lithium, silver oxide, zinc-air, zinc-carbon and zinc-chloride, to name just a few -- that can seep into our groundwater. Environmental safety is just one reason for us all to work to eliminate the disposable battery. The Cota Forever Battery can do just that.

The Future Looks Bright … and Wireless

What’s next? Eventually, all devices that typically need battery replacement or need to be plugged in or placed on a mat will be made with a tiny Cota receiver chip built in. Manufacturers will soon leverage the battery compartment for other product features or remove it altogether for a slimmer design. This is real wireless power.

We love to challenge people's core assumptions about what is possible with wireless power. The Cota Forever Battery is launching in the popular AA battery size; additional sizes will soon be available. Get ready for a truly wire-free, powered-up world that is always on and always connected.