Americans buy nearly three billion batteries each year to power devices like toys, watches, and portable power tools. Each battery that inevitably runs out of power is often thrown into a landfill. To help combat this environmental problem, Ossia developed technology for the first-of-its-kind Cota™ Forever Battery that never runs out of juice. Be part of the first wave to embrace the wireless future by harnessing each of the following five innovations that leverage wirelessly charged batteries. 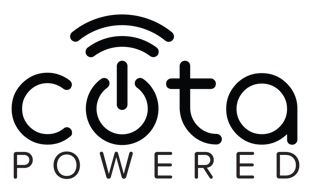 With seven billion cell phones worldwide, smoke detectors inside kitchens everywhere, and a multitude of other wire-free devices at home and work, the need for batteries is ever-present. Cota wireless power enables devices already using standard battery formats to reap the benefits of wireless power immediately.

Currently designed to fit the specifications of the AA single cell battery, the Cota Forever Battery stays charged by receiving power from radio frequency signals sent out by a discrete transmitter. The power is dispersed just like WiFi. The Cota Forever Battery transports devices from the wired to the wireless age without major redesigns.

2. The AA format is a critical building block to transitioning to wireless.

Because devices already outfitted for AA batteries can use the Cota Forever Battery and maintain a charge, wireless charging technology can be used right away without bothering with wires or charging pads.

Recognized by the Consumer Technology Association CES Innovation Awards Program, the Cota Forever Battery is the gateway to a real wireless future … and the AA battery is just the beginning.

With wirelessly powered batteries that fit seamlessly into past and present technology and don’t need changing, designers and developers will begin to envision wireless power everywhere, and people will begin to see a design transformation of everyday devices.

With Cota Wireless Power technology, every battery-operated device inside a space can potentially charge simultaneously, based on your preferences. The easy-to-use, safe radio-frequency-based wireless power is sent from a transmitter to devices, no matter whether they are static, in motion, or behind an obstruction.

Never having to replace batteries, a consistent stream of charge sent to any device, and being able to swap out traditional AA batteries and replace them with the Cota Forever Battery is not only the ultimate convenience, but it’s also a huge environmentally friendly step forward. 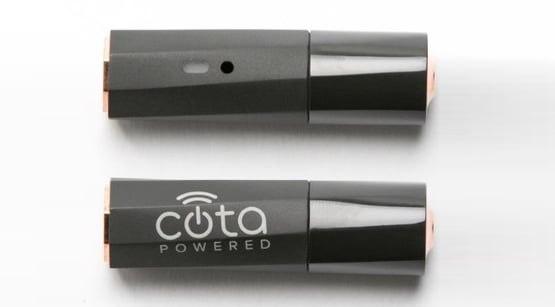 4. Reduce the environmental impact of battery disposal by switching to wireless power.

Batteries contain heavy metals such as mercury, lead, cadmium, and nickel, which contaminate the environment when batteries are improperly disposed.

As stated in its name, the Cota Forever Battery has a lifecycle beyond all traditional batteries on the market. It will reduce the waste and detrimental impact on the environment caused by typical battery disposal.

In other words, adopting wirelessly charging batteries that last forever will drastically reduce the number of batteries thrown away each year: estimated at three billion batteries in the United States alone.

The Cota wireless power system has three main components: the power receiver, the transmitter, and cloud software. Together, they work over distance to deliver wireless power to devices on the move and outside line-of-sight. Devices receive as much as 4W of power from up to four linked Cota transmitters.

The Cota Cloud platform, meanwhile, offers a range of opportunities for businesses and consumers to activate, monitor, and manage their Cota-enabled devices.

The Cota wireless system provides automatic wireless power to both personal and industrial devices, without the need for user intervention. Smart home devices such as security systems and thermostats as well as retail checkout kiosks and cellphones can all be a part of the Cota wireless power system.

Contact Ossia to become an early adopter of the Cota Forever Battery.