Wireless Power Transfer for Soldiers in the Field 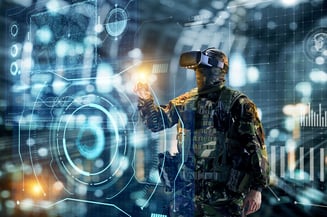 Search the term "military wireless power applications" in Google and you will find no less 48 million results. The interest for wireless power to support a variety of military applications is nothing new. Darpa, the Defense Department's advanced research organization, announced back in July 2011 that it's looking to build a short-range wireless power transmission system for troops in the field1.

Interest has only grown over the past 9 years as advancements in portable electronics technology has increased the number of devices a soldier carries onto the battlefield and innovations in wireless recharging capabilities for the growing commercial electric vehicle market. Everything from smart phones to radios to augmented reality glass to universal translators to GPS devices, and many, many more. The modern-day soldier is required to carry a plethora of devices all requiring power to keep them charged up and powered especially during long missions.  There is typically not an opportune time to pull off on the side of the road to a rest area and find an electrical outlet when you're on the battlefield so powering these devices becomes mission critical for modern day warfare.

Army battlefield electricity is currently fueled by diesel-powered generators as part of resupply convoys. Studies show that 52% of U.S. military casualties in Iraq and Afghanistan occurred during attacks on land-based resupply missions, and dispersed Army elements can’t always be resupplied by traditional convoys while in combat.2

The problem is compounded by just the sheer loads combat troops carry today. Surveys from recent wars have found dismounted ground combat troops carrying anywhere from 90 to 140 pounds or more in combat and on average 20lbs is just from batteries. Heavy loads reduce mobility, increase fatigue, and reduce mission performance.3

Now imagine if wireless power worked like WiFi does today. How would that look?

The ability to meet anything less than these five capabilities listed above would be considered "limited" wireless power.  Each of the five capabilities are required to provide the spatial freedom for devices to be always on and connected to support the mission.

Reducing size and weight while increasing power and performance of physical and technology systems can be achieved today. Batteries could be significantly reduced in size or eliminated as well has holes. Only left to the imagination of industrial designers and product managers devices could be totally redesigned, made small and lighter while increasing performance.

To learn more about Cota vs Other Wireless Power Technologies download our white paper.